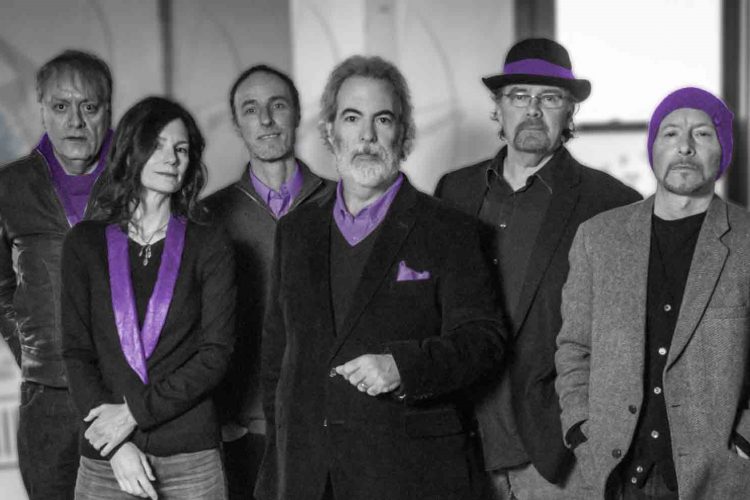 It proved to be a big night out for the suburban crowd at a sold-out Cary Hall in Lexington, Mass. for 10,000 Maniacs 40th Anniversary Celebration on Sunday night. The band took the stage just after 7:00 and played for nearly two hours. Ideal for anyone looking to get home at a reasonable hour.

They opened with “Because the Night” and played all the hits, including “Like the Weather,” “Trouble Me,” “Candy Everybody Wants,” “What’s the Matter Here?” and fittingly, as we’re in Massachusetts, “Hey Jack Kerouac.” In between they pulled from their back catalog, especially their ninth studio album, Twice Told Tales, a collection of traditional folk songs from the British Isles.

Guitarist Jeff Erickson, guitarist John Lombardo, bassist Steve Gustafson and keyboardist Dennis Drew lined up straight across the stage behind singer/violinist Mary Ramsey. Everyone had iPads strapped to their mic stands– a sign of the times and aging. Most everyone remained static throughout the show except for Drew, who kept excitedly dancing around in circles. Ramsey didn’t say much.

Gustafson explained that the band is a family affair and his son is a guitar tech. He also stated: “We like to play, but we love to play for you.” A tag line from their social media. Toward the end of the show, he urged the crowd to dance and a bevy of soccer moms (and dads) proceeded to dance in the aisles and in front of the stage. Cary Hall reminds me of a high school gymnasium with better sound.

Lombardo, Gustafson, Drew and drummer Jerry Augustyniak are the remaining founding members. Ramsey toured and recorded as back-up singer with 10,000 Maniacs for years —she sang back-up and played viola for the MTV Unplugged performance, which ended up being a huge hit for the band. Ramsey was the easy choice to take over as lead singer after Natalie Merchant left to pursue a solo career. Although Merchant may forever be connected to the songs, Ramsey makes the songs her own. She utilizes an interesting delivery, timing, spacing and softer tone.

The show chugged along in enjoyable fashion with relatively laid back vibes, minimal fanfare and simple lighting—just a cool backdrop with floral and tie-dye-esque patterns. It’s all well-suited for smaller, more intimate venues. Although not an  entirely memorable experience, 10,000 Maniacs clearly enjoy playing which ensures an overall fun outing.