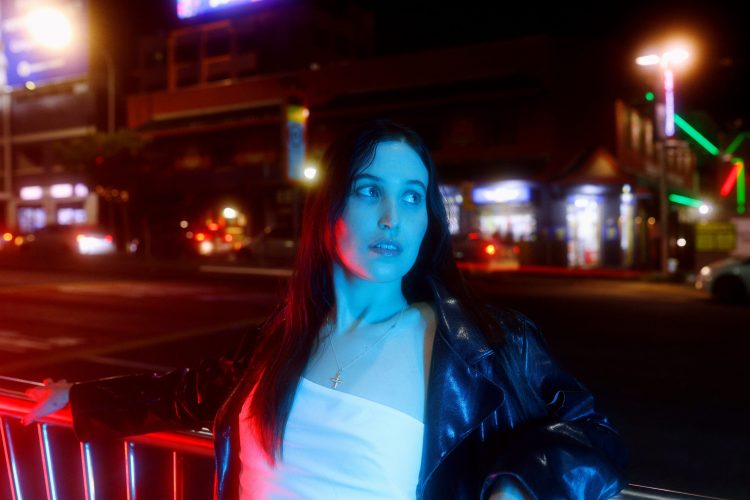 Harriette Pilbeam, otherwise known as Hatchie, decided to reveal a more expansive version of her music on her sophomore album Giving the World Away. “I’m capable of writing more than just nice dream-pop songs, and there’s more to me than just writing songs about being in love or being heartbroken — there’s a bigger picture than that,” Pilbeam explains. “This album really just feels like the beginning to me, and scratching the surface – and even though it’s my third release as Hatchie, I feel like I’m rebooting from scratch.”

When 2018 EP Sugar & Spice and subsequent debut LP Keepsake both arrived to critical acclaim and catapulted Hatchie into an international spotlight, the newly found fame left her feeling unsure of herself while also feeling an intense, self-imposed pressure to keep going forward. Trapped in constant motion, Pilbeam was unable to be present or appreciative of herself, both professionally and personally.

She touches on that struggle directly in the moody single “Quicksand,” collaborator Dan Nigro. “I used to think that this was something I could die for / I hate admitting to myself that I was never sure,” she sings, inverting the thesis of one of her early break-out singles “Sure.” And then, a few lines later, she regains her footing — in her musicality, and in herself: “It’s all I know, and I’m taking it back.”

Initially intending for the record to consist of a higher energy pop sound, things changed between Covid and the lockdowns in Australia, Pilbeam retreated more into herself, and that introspection and self-discovery served as the true inspiration for the record. Again and again across Giving the World Away, she returns to that same theme – dismantling internalized shame and finding gratitude and steadiness, and finally being able to trust herself.

“​​I feel ready to move forward and like I’ve really taken the time to appreciate my accomplishments and appreciate myself a lot more than I used to,” Pilbeam says. “I think I’m always going to be like an anxious, unsure person, but I do feel like I’ve taken steps forward to understanding myself better and going easier on myself. So I feel good. I feel really, really ready.”

Listen to Hatchie’s new album Giving the World Away – HERE.

// Hatchie plays Crystal Ballroom (Hobbs Building, 55 Davis Square Somerville MA 02144) on Friday May 6th. Doors open at 7pm with music starting at 8pm. The show is 18+ and tickets start at $16 and are available via Ticketmaster. //