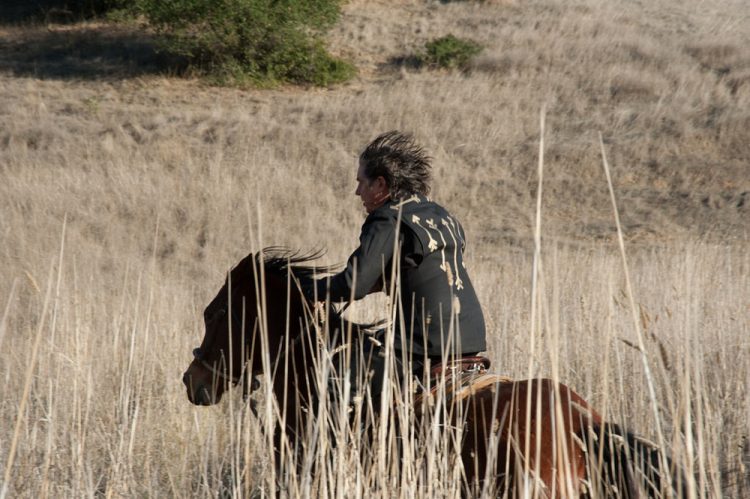 Punk rock legend/poet/actor published author John Doe has a new album out. A founding member of the punk band X, Doe has released 13 solo albums or collaborations since 1990. During the pandemic, Doe got together for weekly outdoor acoustic jam sessions with bassist Kevin Smith and Conrad Choucrou in Smith’s backyard in Austin, Texas. Fables in a Foreign Land is the debut album for The John Doe Folk Trio.

Set in the 1890s, the songs on Fables in a Foreign Land address isolation, loneliness and a simpler, yet stark and often barbaric pre-Industrial era. Guest co-writers on the album include Shirley Manson (Garbage), Exene Cervenka (X), Terry Allen and Louie Pérez (Los Lobos).

Doe and Exene Cervenka formed punk band X in 1977 and the band released six studio albums between 1978 and 1993. Doe has appeared in 50 film or television productions including Roswell and Road House. He co-authored a book, Under the Big Black Sun, on the Los Angeles punk scene from 1977-1983. Doe currently lives in Austin, Texas.

The John Doe Folk Trio is currently on tour and will be in Massachusetts at Club Passim on June 18 where he will perform 2 shows, one at 7 and one at 9:30, tickets for both shows are still available and can be purchased HERE.

We recently had the opportunity to interview John Doe via email.

NE Sounds: How did you come up with the concept for Fables in a Foreign Land?

John Doe: Nothing was pre-conceived or conceptualized. It didn’t feel like I “came up with” it. More like it came to me through dreams, imagination & intuition.

JD: It was not a simpler time, just more elemental & dramatic.

NES: Is there a central theme connecting the songs on the album?

JD: After hearing the songs, my daughter said “There’s so much isolation & loneliness.”

Which is true when you’re traveling. It surprised me how much it related to people’s experiences in the last two years.

NES: How has the pandemic affected your songwriting?

JD: It allowed more time to concentrate without touring on the songs and developing the sound for the (John Doe) Folk Trio. I give Kevin Smith (Willie Nelson) and Conrad Choucroun (NRBQ) a lot of credit for developing the sound by listening with open minds and their determination.

NES: You’ve been writing songs for decades, how do you keep things interesting?

JD: It seems important to keep expanding, opening yourself up to different areas of personal growth, plus finding new art that inspires.

NES: How was writing and recording different for this album vs. previous albums?

JD: There was more dedicated time to develop and the recording was truly live, no fixes for bad notes.

NES: I especially like these songs; could you tell me something about them?

JD: Inspired by the murder of George Floyd

JD: One day on tour, Shirley Manson addressed Exene (Cervenka, of X) and I in a very casual manner: “We should write a murder ballad.” Garbage, Exene and I recorded a very heavy, goth version in waltz time which was released on a RSD in 2018. This version reclaims the folky essence of a classic murder ballad with our twist on it.

JD: There are many kinds of prisons that we can put ourselves in or can be put into. This story tells one where the two people help each other out of their personal jails. It’s an older song that fit with the time and place of the record.

NES: You’ll be at Club Passim in Cambridge, Mass on June 18. What can people expect at the show?