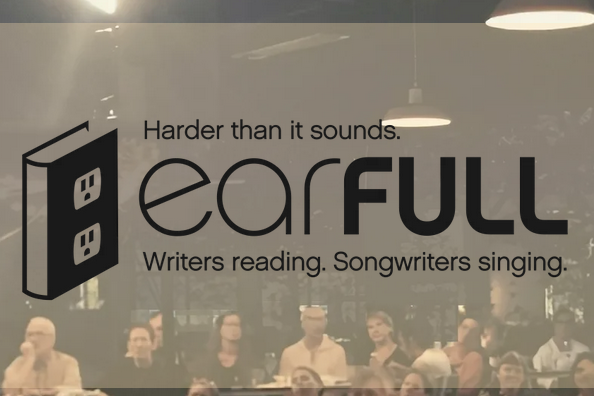 On a balmy Tuesday night at the Branch Line in Watertown, the June Earfull Series concluded its month-long run. Boston musician and author Jen Trynin and bookstore aficionado Tim Huggins developed the Earfull Series as a way to introduce music lovers to books and book lovers to music. In the case of those who love both books and music, it’s the perfect cultural and social event. It’s a simple and delightful concept. In an intimate setting, authors read from their current (or upcoming) books and musicians perform.

The evening commenced with author Zain Khalid, named a New York Times “Writer to Watch this Summer.” His debut novel, Brother Alive, will be released on July 12. Khalid read several passages conveying the dark, sad and sometimes funny aspects of this novel about three adopted brothers who live on Staten Island above a mosque with their imam father. It explores family, identity and sexuality.

Next up, veteran bluegrass musician Jimmy Ryan sang a mix of songs–some uptempo, some slower– showcasing his prowess on the mandolin. He performed “This Town” which he co-wrote with Billy Conway, who he described as the “late great raconteur.” This moving set definitely had the crowd toe-tapping and shimmying in their seats.

Author Marie Myung-Ok Lee is a natural performer. She read several passages from her new novel, The Evening Hero, in a dynamic, engaging manner. The novel follows a Korean immigrant pursuing the American dream. Dr. Yungman Kwak comes to the Mall of America to administer vaccines. It seems smart and funny. One line that stood out: “She probably envisioned illegals as dirty and scary and not as the two doctors standing before her.”

To close out the evening, Shyam Nepali and Joyous Gurung performed traditional Nepalese folk music. These mostly soothing and meditative songs on guitar and violin were the perfect final act. They were such a crowd pleaser that they were urged to play another song which they fused with Santana’s “She’s Not There.”

Even if you aren’t familiar with any of the musicians or authors, it’s a worthwhile event because you’ll surely be a fan of someone by evening’s end. Watch out for the next Earfull Series in the fall.

For more information on the Earfull Series visit their official website.