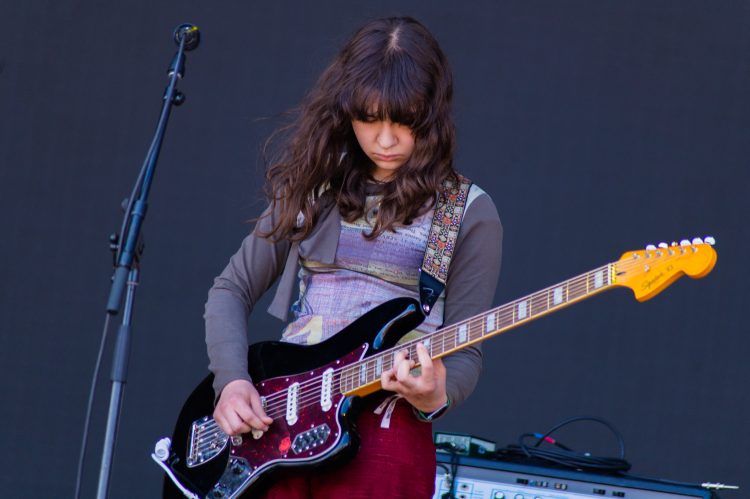 “We’re from a community of young people in Chicago,” guitarist/vocalist Penelope Lowenstein said to the crowd at the Sinclair in Cambridge last Sunday night. “If there are any young people in the audience, feel free to move forward.”

Comfortable and confident onstage, the teenagers met through Chicago youth art programs. This is the first North American tour for Horsegirl in support of their debut album Versions of Modern Performance. It’s the band’s second time in Cambridge as they previously played this spring’s Boston Calling Festival. They’ve already toured extensively in Europe.

The band didn’t get a proper soundcheck and weren’t even rattled. After being stuck at the Canadian border, they arrived at the Sinclair when doors opened. Their soundcheck consisted of popping out onstage a few minutes before their set. “Some people saw me arrive in my pajamas,” guitarist/vocalist Nora Cheng said.

Horsegirl played a tight 45-minute set. The indie rock band opened with a swirling “World of Pots and Pans.” They have a 90s sound with hard-hitting, metallic grungy guitar, reminiscent of Velocity Girl, That Dog, and Sonic Youth. Horsegirl actually started as a Sonic Youth cover band. The lush, gorgeous vocals and dark undercurrent on “Beautiful Song” reminded me of the local 90s band (and my personal favorite) Mistle Thrush.  On the churning and creative “Ballroom Dance Scene,” there are harmonizing and layered vocals. Other stand-outs were the infectious single “Billy,” a hard-hitting and visceral “Anti-glory”—drummer Gigi Reece really impresses —and the dreamy “Bog Bog 1.”

If you feel like a road trip, Horsegirl will be opening for labelmates Pavement in Brooklyn in October. GenXers can take their GenZ children to the show.