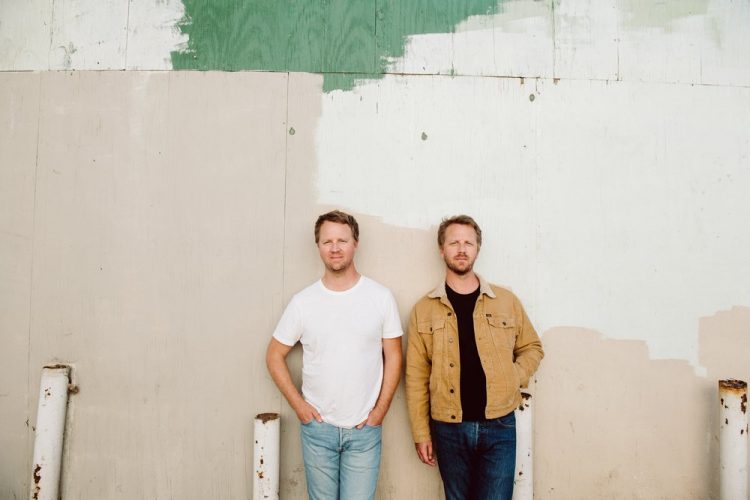 At first glance, California-based band Cayucas seemed an unusual choice to open the show. A surfy indie rock band opening up for a dark post-punk band? But why not? As they enveloped the venue with their warm, jangly melodies, many in the audience swayed to the beat.

Named after Cayucos, a coastal California town, Cayucas are an amiable duo who played a mellow, sunny set. Their songs blend California surf vibes with retro elements. If you close your eyes you can imagine lapping waves and salty sea breezes. I envisioned hammocks and fruity, bright-colored cocktails.

When Zach Yudin harmonizes with his twin brother Ben Yudin, it’s reminiscent of the Everly Brothers. On other songs, Zach’s singing reminded me of Chris Isaak. It’s cool that one brother (Ben) is left-handed and the other (Zach) is right-handed. Very yin and yang.

They played their recent singles— the cozy, nostalgic “Sayulita,” and the energetic “Topo Ride the Wave. A definite standout was the laidback, breezy “California Girl,” from their 2020 album Blue Summer. I’d like to see Cayucas in a smaller venue, somewhere that serves chips and guac.

Meanwhile, Echo & the Bunnymen headlined the night, playing to a crowd of mostly older fans mixed in with a few younger ones. A few parents brought their older children. There were Goths in full pale makeup, fishnet hosiery and platform boots among the sporty bros with baseball hats, t-shirts and jeans. To my left, a guy played air guitar, piano and drums throughout the set.

The group formed in Liverpool in 1978. They didn’t come on my teenage radar until their 1985 compilation album Songs to Learn & Sing. They’d released four full-length studio albums prior to that. When they last played Boston five years ago in 2018, Echo and the Bunnymen were at the Orpheum. I went back to look at the review I wrote of that show. They opened with “Going Up” and closed the set with their hit “The Cutter” just like they did on Wednesday. They also played “Ocean Rain” as the last song of the night during the encore.

Dressed in his customary black trench coat and sunglasses, singer Ian McCulloch sat down for most of the night. The 63-year-old has been struggling with illness and back issues throughout this U.S. tour. A fully stocked table on his right held various beverages, a box of Kleenex and a towel. His voice still sounded pretty good and progressively got better and stronger. Minimal lighting kept the band in the shadows most of the night which absolutely fits their sound and mood. With 13 albums to choose music from, Echo & the Bunnymen played a mix of popular and lesser-known songs like “All That Jazz” and “Villers Terrace” from their debut album, Crocodiles.

For Americans, McCullogh’s Scouse accent can be difficult to comprehend. He didn’t talk a lot but one time he mentioned how when he’s on stage he believes he should be talking about his feelings. Another time he had an exchange with a British audience member. When that conversation went on for a bit, he started getting heckled and some people annoyingly shouted out song requests.

The evening started with the mellower songs. McCulloch sang with a varied cadence on songs like “Rescue,” the introspective, yearning “All My Colours,” a slower all-around, sweeping “Seven Seas” and the gorgeous “Nothing Lasts Forever.” Before playing “Flowers,” McCulloch said, “This is for the Queen.” He used echo vocals and encouraged the audience to sing the chorus on “Bring on the Dancing Horses.” Guitarist Will Sergeant has some amazing riffs and was especially impressive with guitar slides on  “The Cutter” and “The Killing Moon.” By the time they got to “Bedbugs and Ballyhoo,” McCulloch’s vocals seemed to have warmed up more and the energy level picked up too. Who knew Echo & the Bunnymen were also a Doors cover band?  They played two Doors covers– “Roadhouse Blues” and “People are Strange,” which they recorded for the Lost Boys soundtrack in 1987. (I’d almost forgotten about that until I went to write this review.)