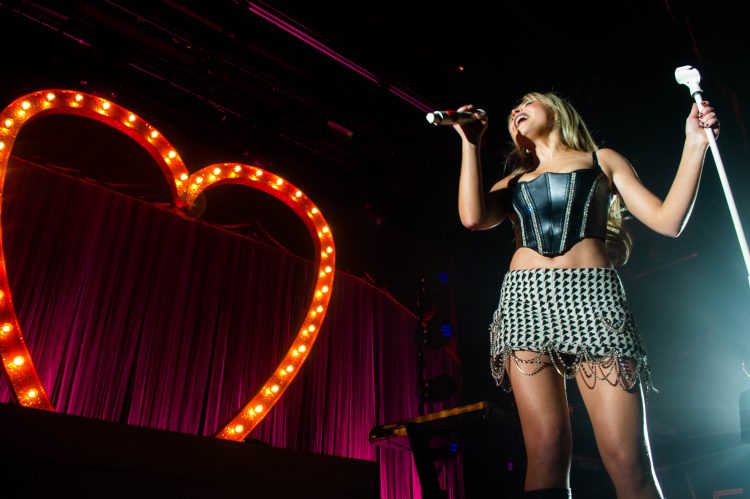 The sold out crowd packed Big Night Live Monday night in anticipation of seeing Sabrina Carpenter. Before she even came on stage, the crowd was belting out lyrics to the songs on her pre-show playlist, especially the iconic 10 minute version of “All Too Well” by Taylor Swift. Sabrina appeared on stage in the middle of a single stage prop: a light up heart. She began with just her and her piano with the title track on her album, emails I can’t send. Immediately, the crowd was matching her energy and belting out the vulnerable song as loud as they could.

The mood shifted to a sassier side when she left her piano and walked down the stage to “bet u wanna.” It was a high energy song that allowed Carpenter to express more of her rocker side, interacting with both her band and the crowd as she jumped around the stage. Sabrina took the time to say thank you to the fans and expressed her excitement for the crowd and the show to come.

The vocals and energy that was expressed during Sabrina Carpenter’s show Monday is clear why her fans are so passionate about the talented star. The majority of the setlist was from her most recent album, but she made sure to put some throwbacks in there for the fans that have been there since the beginning. With such amazing talent and personality, I cannot wait to see all of the success and catch her the next time she is in Boston!