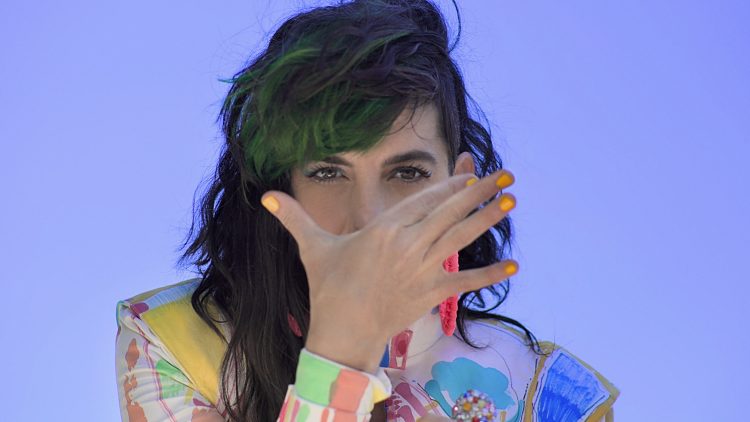 Exceptionally flamboyant performance artist Bitch is kicking off her North American tour tomorrow night in Somerville, MA at Crystal Ballroom. It’s one of five New England dates on her tour which also includes stops in Maine, Vermont, and Connecticut along with a date in the western part of Massachusetts. Bitch is on the road supporting her new studio album Bitchcraft, her first new LP in nine years. Talking to New England Sounds about the new album, she tells us: “This was the longest I’ve ever spent crafting songs for an album.  I was inspired to imagine myself as the biggest version of myself.  To close my eyes and hear the exact music I wanted to hear, not just what I could play right then and there.  I wanted my violin to be the thru-line.  I wanted to capture my youngest voice (the violin) and let my early influences (80s synths) lead the way.”

The record is out now on Kill Rock Stars. The new collection of songs urges listeners to think about the state of the world, about evil politicians, about what it means to exist as a woman, and how to find joy along the way. It’s one that makes you think while making you dance. Along with an arsenal of violins you’ll hear synthesizers, pulsing percussion and witty lyricism, the multi-talented artist takes her sound in a new direction with spectral, heartbreaking, political and beautiful witchy poet pop tracks.

Asked why she chose Somerville to kick off her tour, she says: “I came to Boston to finish Bitchcraft during the pandemic. It has become one of my other homes (outside of LA) so starting a tour here feels like a second home-coming.  Getting to call on Boston friends Catie Curtis and Melissa Ferrick to do the release show with me has been so great.”

Even on her Wikipedia page Bitch is referred to as a “performer” rather than just a singer or a violinist, this is because her live show encompasses more than just vocals and instrumentation. We asked her to describe what the show will look like on this upcoming tour and she revealed: “I have crafted an autobiographical tale, a play, of sorts, to accompany Bitchcraft. I worked with Margie Zohn to co-create it. It will give context to who I am, why I call myself Bitch, why it’s empowering for women, mixed in with these big pop songs that I affectionately call ‘Poet Pop.'”

You can catch Bitch’s tour kickoff on Saturday night – April 2nd – at the Crystal Ballroom at Somerville Theatre, with doors opening at 7pm and music starting at 8pm. You can buy tickets for that show – HERE.

If that show doesn’t work for you, or you want experiences Bitch’s show more than once, she also will be performing in New England on the following dates:

For tickets to those shows, head over to Bitch’s official website.