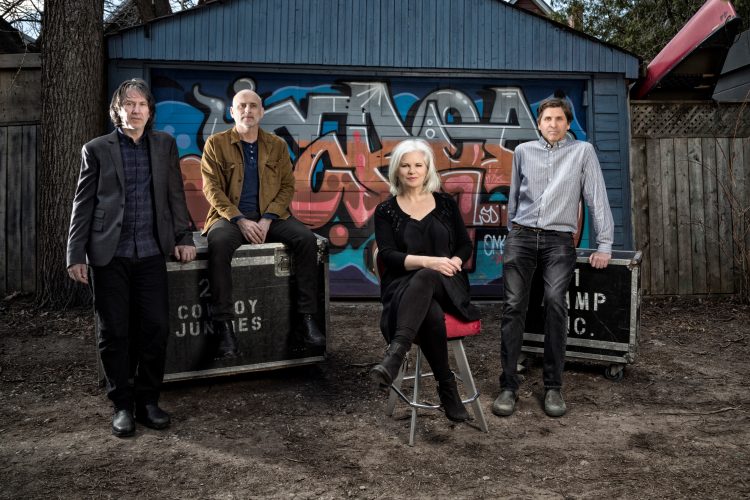 It’s been three years since the last time Cowboy Junkies played a show in Massachusetts. Everyone seems to be back out on tour this year after two years of Covid quarantine. As cold rain fell outside in historical Lexington center, a sold-out crowd tucked into the high school gymnasium-esque Cary Hall to hear some thoughtful, moody and honest music. After playing “Sweet Jane,” Margo half-joked that they were there because they had “lots of merchandise to get rid of.” Later on she explained that they were playing the new album in an effort to get people to buy it. She’s often hawking records in between performing songs. Bands make the most money by selling merch so this isn’t exactly surprising. Maybe it’s all part of their easygoing, troubadour charm. Cash only for albums and CDs out in the lobby yet they don’t sell tour t-shirts.

On Thursday night, Margo commanded the stage, comfortable in her front-woman role, sipping tea and water throughout the sets. She garnered support from her two brothers, Michael on guitar and Peter on drums, as well as band mate Alan Anton on bass. Touring musician Jeff Bird elevated the performance with varied instrumentation, including lap steel guitar and mandolin. They performed two sets which seems to be their standard. They have an extensive catalog to choose from with their impressive 30+ year career and 19 studio albums. Including an intermission, the show lasted two and a half hours.

The first set included several songs from the album Ghosts, written after the Timmons’s mother died. First up, the gorgeous and swirling “Desire Lines.” Then Margo sat on a stool for the reflective and forlorn “Breathing.” They followed that up with the more upbeat “You Don’t Get to Do It Again” which features a cool, churning bass line. This mostly middle-aged audience appreciated the jamming. They moved on to songs from their latest album, Songs of the Recollection, a collection of cover songs. As someone more into classic alternative than classic rock, this reviewer doesn’t recognize many of these songs.  They also choose songs that aren’t easily recognizable hits, which is always smart. Of course “Sweet Jane” is a Lou Reed cover that brought Cowboy Junkies into the limelight of the 1980s alternative music scene. In their distinctly haunted, rootsy, jagged Cowboy Junkies style, they played “No Expectations” by the Rolling Stones and “Don’t Let it Bring You Down” by Neil Young.

The band opened their second set with one of my favorite Cowboy Junkies songs, the stunning “All That Reckoning, Pt. 1.” They played several more songs from the latest album, including  a Gordon Lightfoot cover, “The Way I Feel,” and Neil Young’s “Love in Mind” as well as an acoustic “Powderfinger.” Before singing “Angels in the Wilderness,” Margo lamented that it hadn’t been on their set list for a while. “I really enjoy singing it,” she confided. After expressing her appreciation to the crowd and explaining that due to the pandemic she wouldn’t be interacting with fans post-show, they ended the set with a pretty “Blue Moon Revisited (Song for Elvis).” The encore included “Five Years” and “Walking After Midnight.”

Cowboy Junkies never disappoint live. I have fond memories of seeing them for the first time a decade ago. They’re consummate professionals and clearly enjoy playing and performing. These veteran musicians guarantee a superb, understated show without a lot of fanfare. Perfect for a small sit-down venue like Cary Hall. The crowd remained enthralled throughout both sets with nary a mobile phone in view.