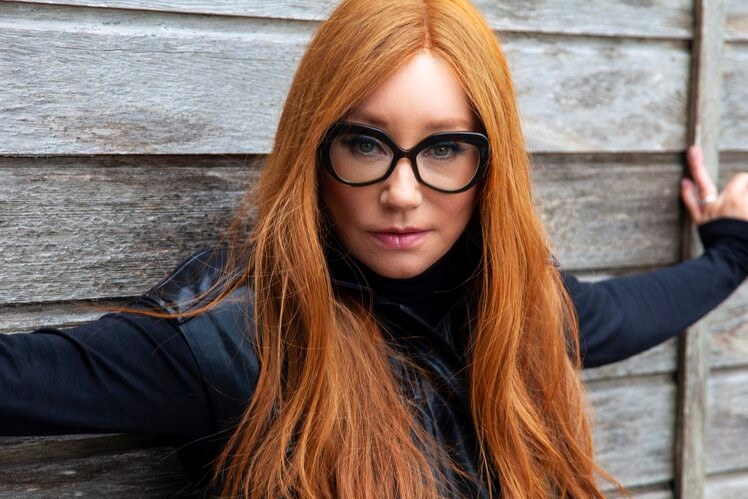 As soon as Tori Amos walked out on stage Saturday night in Boston, the audience was on their feet excitedly cheering. Wearing glasses and looking effortlessly cool and comfortable in a caftan and pajama-like pants, the 58 year old redhead dazzled the crowd with her dueling piano playing. Amos would sit sideways on her piano bench simultaneously playing both her piano and the keyboards behind her to the rousing delight of the audience. It’s obvious she loves to perform.

Amos doesn’t chat much. Throughout the night she’d express her gratitude through gestures such as crossing her arms over her heart. She’s inherently comfortable and commanding on stage with only bass guitarist (and Boston-area native) Jon Evans and drummer Ash Soan for support. I’d love to see her perform with a full orchestra. Vibrant, colorful backdrops and expert lighting provided a magical and mesmerizing setting.

I almost left after three songs because it was so hot inside the historical Orpheum Theatre. It was nearly 90 outside on Saturday. Sitting down helped. Heat rises, after all. I still wasn’t sure I’d last the entire time, but two hours later, I was engulfed in the Tori Amos experience.

Amos plays with fierceness and openness. There’s joy and strength in her performance. Not surprisingly, the nearly sold-out audience varied in age, gender and sexual orientation. Tori Amos is a feminist icon! She writes moving, introspective and powerful songs about feminism, politics, religion, individuality, relationships.

Amos only played four songs from her 16th and latest studio album, Ocean to Ocean, which she wrote while on lockdown in Cornwall, England.  It’s also the 30th anniversary of Little Earthquakes this year. She played two songs, “Precious Things” and “Tear in Your Hand,” from that album for the encore.

Stand-outs included the wistful, beautiful “Ocean to Ocean,” a passionate “Russia,” a gorgeous rendition of “Cooling,” the rather zany and energetic “Spies” (to my delight, the backdrop featured a bevy of eyes), the upbeat, potent “Secret Spell” (a tour debut)  and her cover of Boston’s “More than a Feeling.”