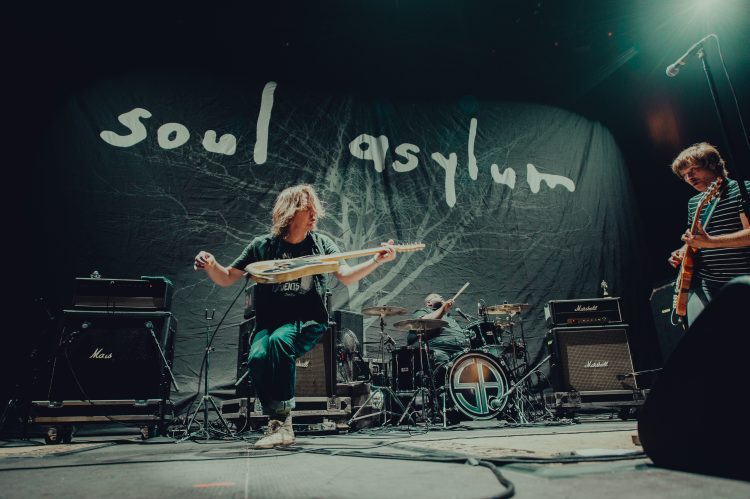 Soul Asylum made a recent stop in Natick, Mass. on Friday, July 8. Frontman Dave Pirner, accompanied by guitarist Ryan Smith, kicked off their hour- and- a- half long acoustic set with a rousing “Get on Out.” The Center for the Arts Natick (TCAN) is a low-key venue with a small auditorium that was three quarters full with a mostly middle aged, mostly white, mostly male crowd.

Early on, singer Dave Pirner said: “My hair is bothering me. It’s unruly. I guess I should be glad I have hair.” He has the same hairstyle he’s always had and looked pretty much the same as he did in the band’s heyday in the 90s. Just older like all of us GenXers. He had a music stand with a songbook on it and occasionally their roadie would bring out additional lyric sheets. In between songs, he told dad jokes. His voice sounded strong and raspy. He’s comfortable on stage and clearly content to be there.

Soul Asylum mostly performed songs from their triple-platinum album, Grave Dancers Union, which was released 30 years ago, and the 1995 album Let Your Dim Light Shine. Even acoustic, the songs were loud. Standouts included a gorgeous, moving “Black Gold,” the pretty, slower “I Did My Best,” the upbeat, yet melancholy “Leave Without a Trace” and a potent “Somebody to Shove.” Pirner encouraged the crowd to sing along to the chorus of “Misery”– you probably know it: “frustrated, incorporated.” They also played several requests, including the honkytonk “Bittersweetheart.” They closed the show with their Grammy-winning song– a deeply satisfying “Runaway Train” — in the encore.

Corey Glover, from Living Colour, opened. He was very chatty and admitted he was nervous. “I like this place, I do,” he commented. He liked its intimacy. He never played venues like this while in Living Colour. He charmed the crowd with his strong vocals, heartfelt singing, sense of humor and ability to share personal experiences. Most of the songs he performed had bluesy, gospel vibes. He sang one Living Colour song, “Love Rears Its Ugly Head.” He introduced it by saying we all needed to put love out in the world to change things.