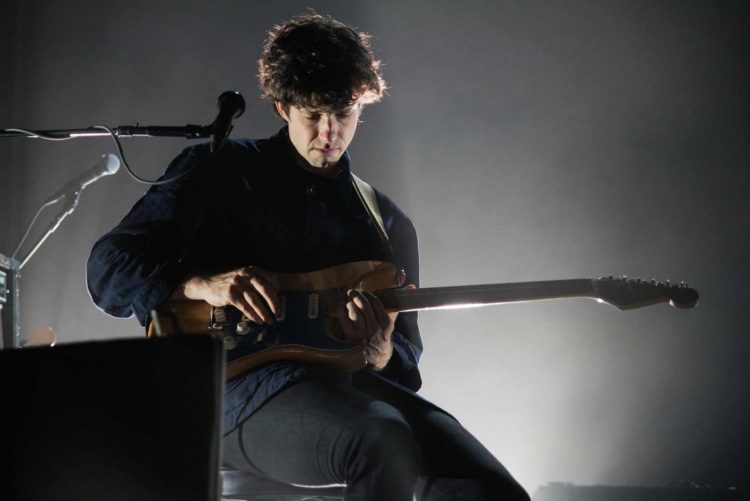 Touring in support of their eighth studio album, Once Twice Melody, Beach House opened with the title song on Friday night at Roadrunner. The sold-out crowd seemed extremely transfixed throughout the night. There was lots of cheering and applause when people recognized the intro to a song.

Songs from Once Twice Melody comprised most of the set list. They also played three songs from Depression Cherry, four songs from 7 and two songs from Bloom. Standouts included: a churning “Lazuli,” a brooding “PPP”, a lovely swirling “Through Me,” a slow build, transformative “Superstar” and a dynamic “Myth.”

Singer and multi-instrumentalist Victoria Legrand, guitarist/multi-instrumentalist Alex Scally and touring drummer create an atmospheric, expansive sound that fills the space. Legrand’s ethereal, captivating vocals deeply resonate. She’s a prime example of the voice as an instrument. She varies her pitch and rhythm from song to song. Beach House successfully blends darkness and light for an emotionally charged listening experience. Their strength lies in thoughtful songwriting combined with innovative, layered arrangements. There’ll be a slow start, a big crescendo and then a soft ending or a super strong churning beat that rips through you. The songs transport you.

A few songs into the spectacular set, I wondered how they can play in near darkness as they do. It just seemed much darker on stage (and throughout the venue) than usual. There was very little on-stage illumination. That complete darkness didn’t persist. The lighting changed from song to song. The visuals amplified the immersive experience but could’ve been pumped up a few notches. Being my first time at new venue Roadrunner, I don’t have anything to compare it with. On a few songs, close-ups of hands playing instruments or Legrand singing would be projected on a screen behind the stage. Sometimes cosmic images and otherworldly designs were displayed. They occasionally threw up the house lights to a sea of adoring fans. On some songs, strobe lights synced to the beat. During “New Romance” a multitude of Legrands playing keyboards looked like crosses.

Beach House’s magical performance provided that essential connection and core memory experience that everyone seeks. There were lots of blissful concertgoers. Plus it was a wonderful respite from the heat wave.