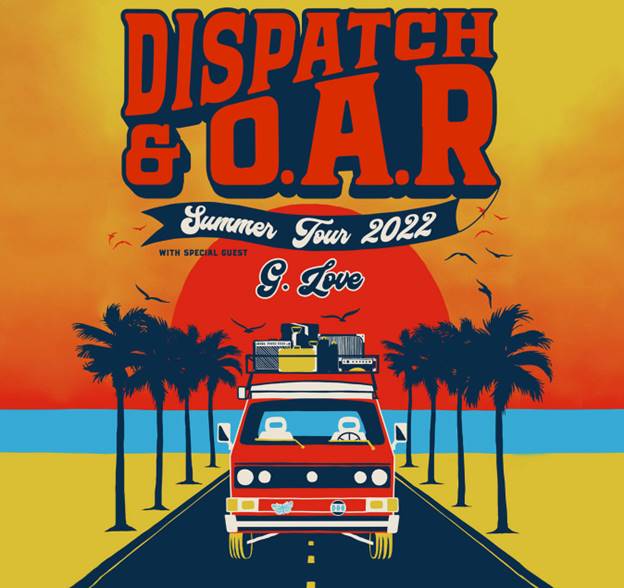 As the end of summer approaches (yikes!), we’re entering the last few weeks of the collective heartbeat that a packed outdoor show crowd singing the words together brings. Lucky for you, hometown legends Dispatch are bringing their long-adored show to the Xfinity Center in Mansfield tomorrow night, being joined by fellow cult favorites OAR and it’s a must-show for any long-time Mass resident! With G. Love along for the ride, it’s the band’s first tour back since the world shut down, and the critically acclaimed eighth record for the band, Break Our Fall, will get its chance to come to life on the stage, to many fans’ glee.

In anticipation of tomorrow’s show, I chatted with founding member Brad Corrigan of the band about everything from the recording timeline of their latest album to how it’s felt to be back in the live setting. Tickets can still be picked up for tomorrow’s show here, and be ready to feel a whole lot of feels!

Brad Corrigan: Our approach has been that we’re not trying to perfect the shows immediately. We’re just being grateful for the chance to play. It’s been a long break for everyone, and it’s the same for everyone. Onstage, or in the venues, the bands, the listeners. It’s pretty emotional to be back. When we were rehearsing a month ago, I remember we were a little bit anxious just because of these last few years. All of this time of intentional isolation was intense. Being around our families, to then have  the idea of getting back in front of crowds of people and traveling all over the country. We missed it so much, but we sort of forgot the feeling of being out there. I think for all of us, it feels like a first again. Taking the stage, playing, seeing peoples’ expressions, and hearing everyone singing again together. It’s not something that we take for granted anymore. It’s been a really sweet experience to feel like, okay, it’s back. Our collective heart is beating together again.

NES: And you and OAR have been together for around the same time.  I know Dispatch had the hiatus years ago, but you both have been bands for so long. You’re not a new band. The pandemic wouldn’t destroy Dispatch; it wouldn’t break you up. Maybe advice for bands that were just getting started when Covid hit were in their first year of being in a band? Or maybe they even are just now going on their first tour, post-Covid. I’ve interviewed a lot of bands during this time that have been together for twenty-plus years, and who talked a lot about how a pandemic wouldn’t break them.

BC: Well, I think probably the advice is, that everything’s really out of your control. The only thing in your control is how you react to some things. And maybe the why. I think the why is always about how you feel. You need to be making music, and you need to express yourself, to play no matter how long you have to wait. So you just roll with the punches. Outside of the pandemic, there are plenty of things that interrupt your creative flow. In terms of one band member not feeling healthy enough to tour or is unable to tour. One of our best friends and bandmates, Pete, one of our founders in 2016, started sharing with us more and more about his struggle with mental illness, making it hard for him to decide if he should be on the road or not. 2017, it was the hardest decision we’ve ever made as a band, and definitely the hardest decision for Pete, his wife, and kids, but he’s not with the band anymore, but he’s making music at home in Connecticut with his crew.

So you don’t know how much is going to change or happen. The one thing you’re sure of is that everything is going to change day by day. So having a hard check-in about why you’re making music is important and just hang in there. And every opportunity you get, don’t miss it. Don’t think about what you did yesterday, about how you may have screwed something up. Think tomorrow, I’m going to do better. Just try to be right in the moment. Just take the chance to make music, scream together about your day, and connect the dots. Have great days where you’re growing.

NES: And then to go with that, you released your latest album during Covid, Break Our Fall,  but considering that this is your first big run back, how are you planning these sets? Obviously, people want to hear the hits but considering this new album is something people haven’t heard yet in person, how have you been going about these shows? It’s a big moment, it’s your first tour back, it’s a massive tour. How did you prepare for this tour, and maybe those early preparations when you first started getting back together in person?

BC: When we set up this tour, co-headling with OAR, we both have more of a headliner set. So instead of us playing almost a two-hour set, and then having there be a twenty-minute encore, we’re at around 75 minutes and then have an encore which we’ve had so much fun doing. We’re looking at thirteen, fourteen songs a night instead of twenty. Then there’s the usual energy when you can hear the songs wafting through the air when we play. Then we got these new kids in the back who haven’t had the chance to see us yet. Talk about out of our control; we meant to release “Break Our Fall” and tour on it a month later, so we only missed that by a couple of years. But those songs are still really exciting for us, like “The Legends of Connie Hawkins” is one we’re enjoying playing. The story of the song but also the playing of the song it’s really supposed to be a live one. And “Break Our Fall” is like this chugging rock song. The wall of vocals, the wall of guitars, has a really deep emotional set of lyrics that Chad started working on a couple of years ago. We’ll never be able to answer a question like that. We carry the legacy of Pete with us. We also know that everyone in the crowd still does, so I hope that a song like that allows everyone to express that together.

NES: Especially after what we just went through, as everyone steps back into society. Then speaking of that record, you talked about how you were ready to tour the album. Was it something where this album was made before the pandemic, and you waited to release it, or did you record the album during the pandemic?

BC: It was right around the end (before lockdown). I think 2019 is when we were demo’ing all the songs. We played a festival that year, had a lot of time off the road, we were demo’ing songs. And then we had some time in January and February when we were slotted to record. I remember my wife and I were watching the news in mid-January of 2020, and something came up about Coronavirus. I remember being like, ‘What is that? What a weird-sounding thing’, and it became a haunting daily thing. But nothing had shut down yet, so I flew out to meet Chad, and we recorded and kind of laid the foundation for the record. As things were getting worse and worse, it turned out that I think that was my last flight. It was nearing the end of travel time. We got most of the foundation of the record done and then, the lockdowns. And we didn’t get the chance to get back together to mix it. So we took a lot of time, and when our tour was canceled, I was like, well let’s keep working on the record. So the short of it, he worked where he was, I worked out of Colorado, and we got together later for the record and did the mixing virtually, and then eventually released it in May 2021.

NES: Then you’ve been a band for so long, this was probably the first time you were working on a record virtually. Is there anything from that process that you will keep doing? Like anything you liked from the time, something you think you would do again?

BC: No, mostly we hated it. It’s a thing where when Chad and I are in the studio together versus when we’re apart, we work fast and furious and become a kind of collective brain. When we were solo, for example, I’d be doing what I think was a really cool part but not have the other person to bounce it off of and vice versa. When we’re together, we’re really in sync. So I think we do not want to do more of that. Be apart from each other, and we will if we have to, but I think the Zoom part made the envisioning of it all a little easier, being a part of each other’s world when it came to demo’ing and thinking about who we want to work with, that was helpful. But creating wise, we’re better together.

NES: Then, like I said before, you just started this tour; you’re only a few dates in, you come to Boston on August 20th. As touring goes full force again, what’s kind of in the hopes or goals for Dispatch over these next few months?

BC: Well, number one, we hope everyone stays healthy through this touring period. We’re definitely trying to keep it as Covid safe as possible. At the same time, we definitely want our hearts to reconnect as best as we can. Hopefully, everyone that comes to a show, we hope that we have this moment where we feel like we’re doing that. We just feel like we are one with each other. We’re all in agreement, we’re all feeling this collective breath together. These past few years have been wild. There’s never been a more divisive element in the ether, so we hope that these shows can be a place where people come together for a couple hours as a reminder that there are good moments. Enjoy the moment that we got as a crowd. And I hope with this tour, we’re providing a spotlight and awareness for the battle of mass incarceration in our country. We’re not able to say much these days, and we don’t know really what the answer is. But we do know “Ending Mass Incarceration” is an organization that we’re partnered with, we’re doing a ticket tax that goes to them, we’ve got a t-shirt/poster that was designed by folks who were in prison and are returning to society. It’s a new subject for us, but we lead the entire world, we’re the most incarcerated country in the world. The distant second is Russia and the distant third is Iran. And the way that we put pressure on Iran and Russia, well, you know. So we’re excited to have  the chance to canvas and use our platform for it.