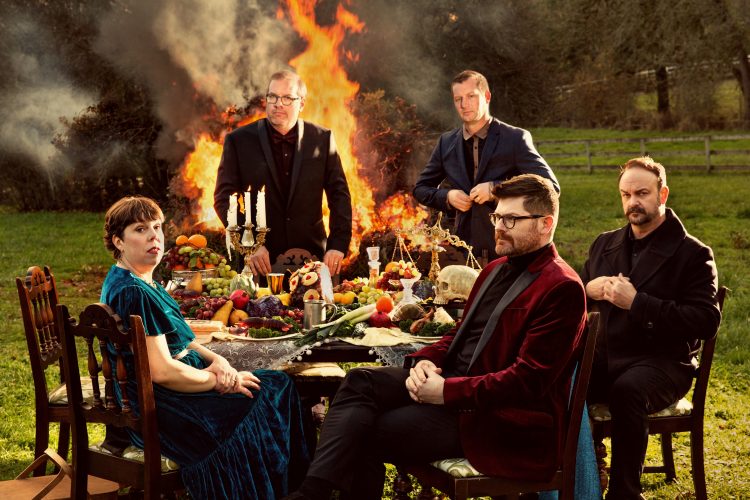 After having to cancel last year’s tour, in celebration of the band’s 20th anniversary, The Decemberists are back in full force on the Arise from the Bunkers Tour. The band stopped in Boston at Roadrunner on Sunday, August 21. “Hello Boston, it’s good to see you after all these years,” vocalist/guitarist Colin Meloy proclaimed to an enthusiastic, cheering, nearly sold-out crowd.

Two decades together and nine studio albums worth of material allows the indie folk band to showcase a wide range of songs. Opening with the old timey circusy “The Infanta” from 2005’s Picaresque and closing with the long, introspective “I Was Meant for the Stage” from 2003’s Her Majesty the Decemberists, they played for a solid hour and a half including a two-song encore. “We’ve been a band for a really long time,” Meloy said. After playing “Shiny” from their debut Five Songs EP, Meloy quipped: “Ah, the sounds of 2001 ringing through…” before playing “Calamity Song,” Meloy said, “This is a song about the end of the world.”

I’ve been in quite a funk lately, struggling with my depression. I thought I might not even make it out to the show. But I managed to drag myself out. Music makes me feel better and (excluding other obligations, like reviewing this show) it definitely did. I’m a big fan of the Decemberists and their unusual, elaborate, dark songs about death, war, twisted fairy tales and historical events. I find comfort in their exquisitely gorgeous and dynamic songs. The evening warmed my cold heart a little bit.

The Decemberists impressed with varied instrumentation (accordion, upright bass, keyboards), resplendent cadences, experimental arrangements and vaudeville elements. Meloy encouraged sing-alongs. When he pulled out his harmonica, the crowd went wild before he even hit one note of the Grammy-nominated, catchy “Down by the Water.” The night’s best songs were the two which Meloy sang with current touring member Lizzy Ellison–the pretty, melancholy “Yankee Bayonet (I Will Be Home Then)” and the dramatic, epic “The Wanting Comes in Waves/Repaid.” Other standouts included the synthpop, grungy “Severed,” played a bit slower than usual, and a lush, yearning “Make You Better.”