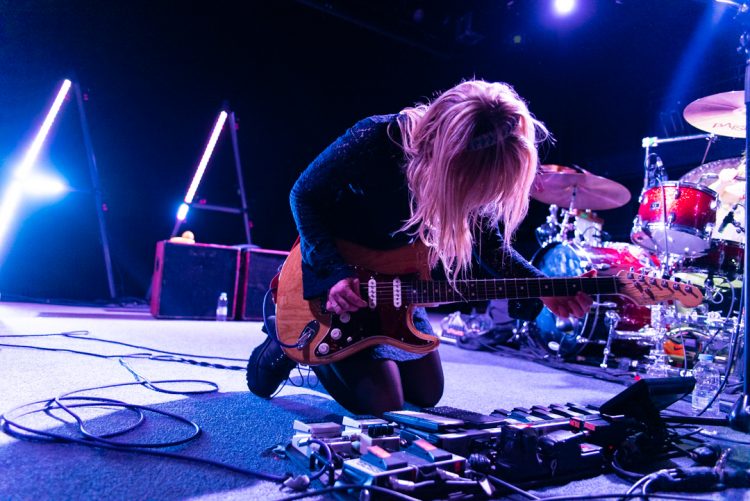 Last year, The Joy Formidable released their fifth studio album, Into the Blue. A decade ago, the band released its electric, expansive debut album The Big Roar, establishing themselves as indie darlings. Their 2013 album Wolf’s Law, recorded in Casco, Maine, charted at 51 on the Billboard 200 in the U.S.

With a nod to guitar-driven indie rock bands in the 90s, the dreampop band’s music features churning guitar, layered melodies and dreamy vocals. Their contemplative lyrics provoke a range of thoughts and feelings. The combination makes for a complete musical experience.

We recently spoke to Rhiannon Bryan by phone from Baltimore.

New England Sounds: What do you do in your downtime on tour if you’re not doing press?

Rhiannon Bryan: There’s been no downtime. It’s been full-on. Bands are juggling a lot. We started at the end of August and we go through to the middle of November.

New England Sounds: How has the band changed since your debut album was released a decade ago?

Rhiannon Bryan: The world has changed. And the industry definitely changed a lot. I would say that we haven’t fundamentally changed in a lot of ways. We still have the excitement for creating as we had 10 years ago. I think I’m a bit more comfortable in my own skin and in being a musician. This latest album feels like it chronicles a chapter of growth and change. Looking back to when we were a baby band, we’ve always loved making music together. I don’t think I’ve always had the tools to deal with the music industry. That comes with experience. We certainly weren’t naive either. But I like where we’re at in our careers. We’ve always had creative control but I like the team and the partners we have now. You learn some of that as you’re going along. The fundamentals haven’t changed which means quite a lot to me. When we first started, a lot of interview questions would be, ‘where do you see yourself in 10 years?’ and I always struggled to imagine it but I always hoped we would be as close as we felt back then. We definitely achieved that level of still being a family.

New England Sounds: How has the COVID pandemic affected the band?

Rhiannon Bryan: The cycle is that we’d come off tour in the end of 2019 and had planned to make a record. So it changed our plans of how we were going to make that record. We were going to be in Wales in a room together and it ended up being more of a remote experience– Rhydian and I in the states and Matt where he lives in England. I don’t think anything suffered because of that. We’ve just had to adapt and that’s been the key word. There’s a lot of change and it’s been a test of how to adapt.

I think I’m going to look back on that album for a long time and see it as being an important and personal album. I had a bit more time for things and a bit more opportunity to reflect and sit with yourself a little more. Touring doesn’t always give you that. Some of the pressures and cycles of the music industry, you get caught up in them. That was the one positive in a challenging time.

New England Sounds: What are the biggest challenges in the music industry for you?

Rhiannon Bryan: I think it’s broken in a lot of respects. It’s felt like it’s been heading this way for a while and in 2019 when we were touring we were kinda feeling like the hustle for bands wasn’t always paying off. There have been a lot of changes from an economic standpoint. Now you’re faced with lots of different challenges. Some of the venues have adapted. It’s not always very artist-friendly. The market’s saturated at the moment. Everybody’s touring to make up for lost time. People don’t have much money so it’s hard to go to shows.

It feels like there needs to be changes in terms of creativity being rewarded and artists being able to be paid fairly on the road. If you’re a small band you have to be smart to navigate some of the things that are happening. We’re out for 80 days now and part of it is a bit of an experiment. We want to understand it. We want to be part of the mechanics of hopefully how to change it as well.

New England Sounds: Why did you decide to move to Utah?

Rhiannon Bryan: I’m very lucky. I do get to split my time. My mum is still in Wales. So I get to spend a chunk of time in Wales and we have a simple recording space in Wales. I moved to Utah spontaneously eight or nine years ago. I was on a road trip with my mum. I’d been touring for a really long time. Don’t get me wrong, I love to wake up in a different place every day. But I thought it might be nice to maybe have a base. I literally just picked a town I’d been through on my road trip. I made some beautiful connections there. We’ve got a little recording space there. It’s different from Wales with the landscape, the wildlife and the colors but it has a similar sense of wilderness to it. I obviously gravitate to quieter spaces.

New England Sounds: Do you have a favorite song on this album?

Rhiannon Bryan: It’s always hard. I loved writing “Chimes” because it touches on those elements of life that can’t be explained. It’s about synchronicity and magic and how the universe is telling you something. You have to be in touch with it. With elements of this record being about slowing down and giving yourself that spiritual space. It’s about my grandfather as well lyrically. I think on a personal level I’m connected personally to the lyrics on that track.

New England Sounds: There’s a cool grungy intro on it. What about “Farrago,” another song with a cool intro? The bass riff reminds me of The Breeders.

Rhiannon Bryan: It touches on someone who’s maybe gaslighted you in some way and you think you maybe need help in some ways. A farrago is a state of confusion. There’s something about that song, saying I’m not the one that’s confused. I can own my mistakes and flaws. I can work on them. Compared to when you let certain toxic people in your life who don’t work on themselves but are quick to point out the flaws that they see in others. It’s about taking your power back from somebody like that.

New England Sounds: What about “Back to Nothing?”

Rhiannon Bryan: It’s a track about not being eaten up by depression. Some of those early years as a band, I didn’t have a name for how I felt sometimes. I was struggling more than I let on. It’s an industry where you have to have really thick skin. It’s okay but sometimes when you are thick-skinned and tenacious you push those things down. It’s silently chipping away your confidence and self-esteem over time. Some of the downs we’ve had are really down. It’s telling me I don’t want to go back to that place. You’re aware of it and see it for what it is.

New England Sounds: How about “Gotta Feed My Dog?” I guess you fostered dogs during the pandemic?

Rhiannon Bryan: That’s a very wry track about preferring to spend time with your dogs rather than humans. One of my go-to’s of lockdown when we couldn’t tour, that was where I threw my energy and attention. I fostered a lot of dogs in 2020 and 2021. So I had 30 dogs, and cats, something like that. It’s a nod to having a lot of animals in my house. The simplicity of that compared to the fucking hell of humans. Puppies are gonna keep you distracted.

New England Sounds: If someone was on the fence about coming to see you what would say to convince them?

Rhiannon Bryan: We’re five albums in, so it depends whether or not they’re invested. We love playing live. It’s very much about being in the moment. It’s difficult to replace that connection you get in that 90 minutes to two hours. We don’t like to be too planned. We like it to be spontaneous. That’s what’s exciting about live music. It can go in different ways and ultimately has to have some depth and leave you feeling something. That’s what’s gone wrong with the music industry: if it’s just entertainment and doesn’t challenge the way you think about art.

The Joy Formidable play The Sinclair in Cambridge, MA on Friday, October 28th. Doors for the show are at 7:30, and music starts at 8:30. The show is all ages and tickets can be purchased – HERE.