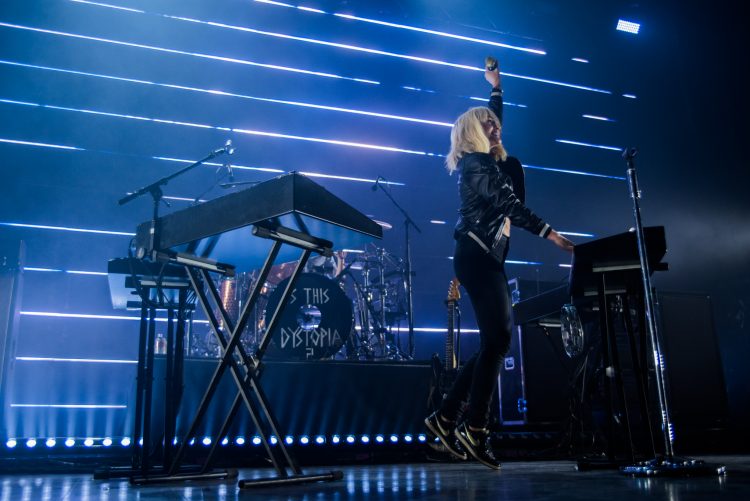 Although it took a few beats for Metric to really get going during the opening song “Doomscroller,” by the end of it, they were much better and louder. On tour in support of their latest album, Formentera, Metric performed an overall electric set at House of Blues in Boston on Monday, October 25. Wearing a gold sequin jacket, Emily Haines (vocals/guitar/synth) maintained a high energy level as she jumped and danced in circles throughout the night. There wasn’t time for chit-chat as they blazed through 20 songs from their eight album catalog. The 90 minute set featured six songs from Formentera (2022), five from Fantasies (2009), three from Art of Doubt (2018), two from Synthetica (2012) and four songs from their other releases.

Impressive drumming by Joules Scott-Key and guitar riffs from James Shaw propelled a fierce “Gold Guns Girls.” For “Dark Saturday,” Shaw and bassist Joshua Winstead flanked Haines as they stood in a row. Fueled by a solid, grooving beat on “Monster Hospital,” Haines sounded like Kathleen Hanna as she repeatedly yelled the chorus: “I fought the war.” Rainbow lights adorned the stage for the synth-heavy “False Dichotomy.”

Haines summed up the mood in the packed venue: “We really missed you guys. This is so fun. This is just fantastic.” A highlight of the show was a sublime rendition of “Help I’m Alive.” Heavy drumming intro’d the song, then slower and quieter vocals built to a crescendo as the lights flashed in sync. The well-choreographed and effective lighting elevated the show. Midway through the set, with strobe lights illuminating the stage, Haines and Shaw performed two acoustic songs — a beautiful, moving “Twilight Galaxy” and a catchy, uplifting “Combat Baby.” There was an extremely dance-y “Cascades,” varied orchestration on the new single “All Comes Crashing” and dual synths on a hyperkinetic “Sick Muse.” The crowd sang along to the chorus of “Gimme Sympathy.”

After this show, Metric wrapped up the U.S. leg of the Doomscroller tour with two shows in Brooklyn. They’re touring Europe in the new year.