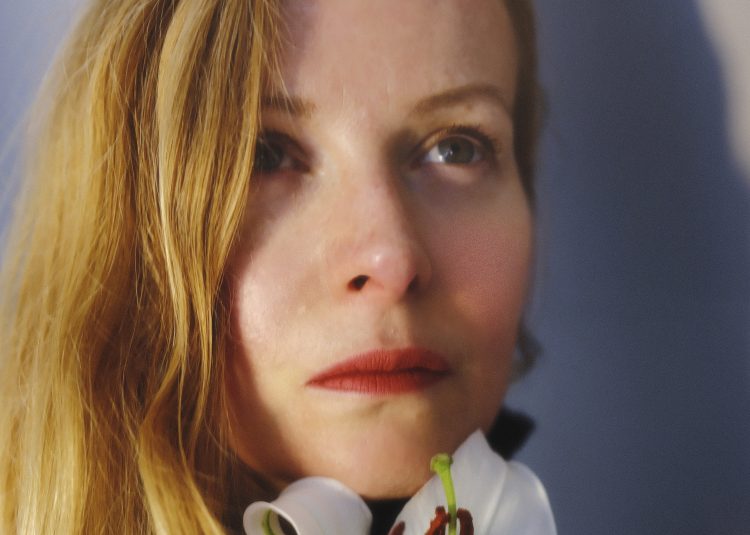 Scottish singer/ songwriter Dot Allison began her music career by fronting the electronic band One Dove in the early 1990s. Allison released her debut album, Afterglow, in 1999. She’s released four other studio albums since then. She writes gorgeous, moving songs. Mixing folk, electronica, indie rock and synth-pop, her music is lush, dreamy and layered. Her voice is emotive and ethereal. Her most recent release, Entangled Remix EP, is a reworking of songs from her critically acclaimed 2021 album Heart-Shaped Scars. She collaborated with Saint Etienne and others.

She recently answered some questions for New England Sounds.

How have you been doing during the pandemic?

Dot Allison: During the pandemic, I have spent time with my family. I did as much home-schooling as my kids would humour me with doing.. and we spent time out in nature, for example swimming in the sea and identifying plants in and around where we live. I listened to a lot of science lectures and I did a couple of science courses online. I wrote poetry and did an online poetry workshop with Megan Falley whose poetry I love. I wrote a fair bit of music really. I decided to learn the ukulele and the first four songs I wrote on it are on the album. Aside from that the usual things; made things I hadn’t had time to make (like bread, linseed crackers, seaweed tartare, raw marmalade).

What have been the greatest challenges?

Dot Allison: Missing my Mum who was isolating due to her age. I waved through her window and delivered her food, but at that stage things were strict so we couldn’t hug… so that was horrible. And trying to be taken seriously as a ‘teacher’ during home schooling.

How has the pandemic affected your songwriting and recording?

Dot Allison: It’s shown me what I am capable of when I am more focused. I had no choice but to return to ideas and to engage in a way I hadn’t before. I am trying to take that forward more. I also now write on ukelele which is cool.

What keeps you inspired?

Dot Allison: The ideas never stop coming I find, so I just keep going without overdoing it… so I don’t tire myself of the joy of creating something out of nothing .

It’s been three decades since you released your debut solo album Afterglow in 1999. The last album you released was Room 7 ½ in 2009. What have you been doing since then?

Dot Allison: Raising a family mainly and working on my songwriting.

Why did you decide to put out this remix EP?

Dot Allison: I wanted to release a set of interpretations of songs. I guess with my roots in dance music and that experimental mentality that was partly born of that kind of music to a degree, it made sense to have those alternative takes on the songs.

Why did you choose these particular songs?

Dot Allison: I guess I just imagined which songs might suit which remix artist the best and went with those.

You’ve done lots of collaborations over the years. For this EP, you work with Saint Etienne—who I adore— as well as Anton Newcombe of Brian Jonestown Massacre and others. How did these collaborations come about?

Dot Allison: With Saint Etienne, we have all known each other since our twenties across music. I did a remix for Saint Etienne about 20 years ago and it was meant to be a swap. I never ever asked for my mix, I am not sure why. Maybe I was backwards in coming forwards but I messaged Bob and said, “If I am too late to ask for the return favour, I completely understand !’ And he said yes! So I was thrilled and I love their mix! Anton and I are working on other projects so that was a natural decision for me to take as I love his work and unique sound.

What do these collaborations bring to the songs?

Dot Allison: I think they are interpretations of art by artists with their own strong sonic fingerprints and they really add a little bit of them and their magic to the songs in that unique way… like an iris, a one-off take on them.

You said that these songs are about love, loss and “universal longing for union.” Can you elaborate?

Dot Allison: I believe that humans are probably all slightly heart-broken on some level. I think the separation from what is before birth and then from the mother upon birth and then onwards in life, that slow separation and independence, all has a sort of longing and loss as well as beautiful sense of hope, possibility and mystery. I think in a way we all long to feel a certain union again and we seek that through various (ultimately transient) things in life–relationships, music, art, hedonism, work, etc. So I guess I wanted to tell that story in an obtuse way in this album.

You’ve always mixed folk with electronica and synth-pop. How does this EP represent you and your ever-evolving sound?

Dot Allison: I guess it’s a more pastoral, earthy & natural sound, with an embrace. with elements from our planet in there, birds, the wind, island sounds from the remoteness in Scotland. Yet my mind I still twist them slightly with an experimental approach so that they surprise in some way.

Who do you admire and consider to be influences in your work?

Dot Allison: My family as I have music in my family and at home there were classroom instruments, stacks of classical score at the pianos, a drum kit and a guitar. But Andrew Weatherall has, on reflection, been the greatest influence in a way. He shared a lot of music with me over the years and curated some amazing collections for me to check out. They have influenced me massively –Gene clark, Tim Hardin, Mazzy Star, Nancy & Lee, Gram Parsons, This Mortal Coil, etc.

Back in 2010, I asked you about sexism in the male-dominated music industry. You said: “As long as women are objectified in the media and in life, I think we face barriers men simply don’t to the same degree.” How have things changed since then?

Dot Allison: I think we have gone from me, ‘way back when’, seeing few or even at times, no women in recording studios at all, or live arenas, backline, stage lighting, visuals, record labels, press circles, to me presenting the ‘Breakthrough Producer Of The Year’ to my co-producer for the album, Fiona Cruickshank.. and my working with Hannah Peel who too is a very important role model for females in music. My album is largely women, although not exclusively, so that was a new and very nice experience for me. As I’ve historically noted the, as you say, ‘male dominated music industry’ of then … so yes…sexual equality and sexism seems to have been on the move. It’s interesting though, as I think the objectification of women is something women will probably always have to resist, if history is anything to go by but at least we are currently on the ascendant and moving towards that elusive horizon of equality.