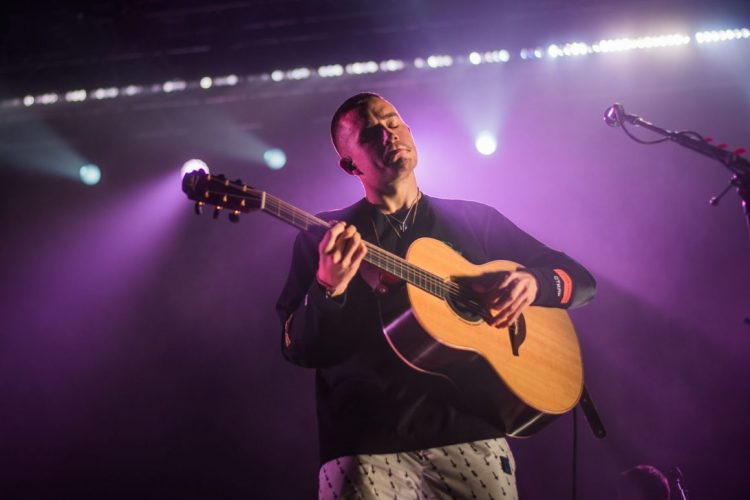 “And we’ll sing your song together.” And sing the sold-out crowd at Merrill Auditorium did for Dermot Kennedy’s first time in Maine on a rainy Monday night.

Illuminated by a solitary purple spot, Dermot Kennedy emerged after his band, shining in the first few chords of “Lost.” The next near hour and a half was a somewhat cinematic experience, with dynamic sound and a broad, scoping stage, perfect for a theatre tour. Paired with a strong storytelling lyricism worded over the big bass beats of pop sensibility, the audience was fixed.

“Power Over Me” showed absolute control in playing with volume within the band. Showing they can stop and start on a dime, glimmering in moments of silence before bursting into a crescendo of noise.

Friendship, love, memories of nights to remember, and undertones of dark desperation and loneliness were the themes of “All My Friends,” “An Evening I Will Not Forget,” “Outgrown,” and “Rome.” Highlighting the highs and lows of life and the course relationships take from the pure bliss of love followed by the twinge and regret of broken hearts help his poetry and imagery flow. Sentimental moments and the outreach for human compassion and empathy played on emotions and invited the audience to feel connected.

“A song [he] wrote about a place that’s very important to [him]” followed, further showcasing that he wears his heart on his sleeve in one of the most poetic and passionate songs in his discography. The open and vulnerable “For Island Fires and Family” was a wonderful moment of unity and beauty, humbling his “ability to connect with human emotion” in a live setting, as it dwindled down to just him and his guitar, pure stillness in the air.

The hopeful and inspirational “Better Days” off of the upcoming album Sonder, proved to emphasize his vocal control and got an especially loud reaction, which suggests it’ll be a huge single in no time. Treating fans to another new, unreleased song, “Kiss Me” switched gears and seized opportunity in the moment as couples cuddled closer together.

The looping vocal effects of “Moments Passed” added a cool vibe and different edge to his sound, making it a soulful sonnet that swirled in a symbolic rhythm. Engulfed in shining bright white and yellow lights, “Glory” continued the spiritual awakening. Continuously building up and up, it climaxed in a passionate and intense drum solo from drummer Micheál Quinn. The sing along of “You won’t go lonely” was the ultimate display of togetherness in “After Rain.” Little pockets of acoustic moments balanced in between full band jams showcased members Benjy “Keys” and Kieran Jones.

“Giants” and most well-known single “Outnumbered” kept spirits up even though it was signaling the end. The placement of the latter in the set also a testament to his writing skills, starting with showing scars, and leaving a message that you’re never alone, and there’s always someone who sees everything you can be. “Without Fear” crooned that love can make you feel again after being in a dark place, and that you should never hide from it. Ending with the latest single, “Something to Someone,” it was clear fans were already familiar with the track and are ready for the release of Sonder in September. Leaving the stage and ending the set without an encore was a bittersweet finale that was genuine and succinct, and the perfect metaphor for his writing style, laying it all out on the floor at once and making a point.

Notable Opener: Cape Cod local Steve Rondo opened with a solo acoustic set that was vocally soft and soothing. The 20 minute set was short but sweet and pleased the crowd with catchy hooks and honest emotion.