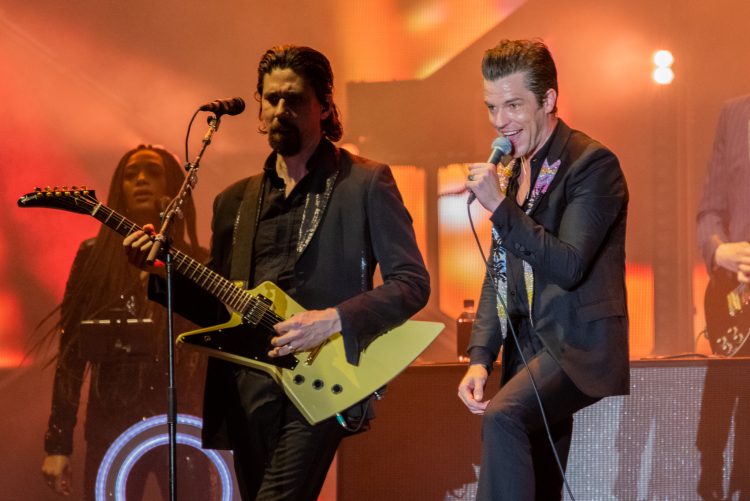 The moment opener Johnny Marr took the stage, the crowd began dancing with glee immediately as Marr and his band started off the night with “Armatopia,” and it never stopped. Marr, the clear veteran he’s known to be, gave the seemingly effortless, without fault, purely rock and roll performance that one couldn’t fault. Marr balanced his set well with solo material, a song from his project, Electronic, and highlights from his Smiths’ career. Still, before one gets ahead of oneself, we can’t stop but mention Marr’s first interaction with the crowd, going, “Hello! Nice to see you guys, thanks for coming out. My name’s Johnny, we’re gonna play a couple of songs for you”. Fans giggled around me at Marr’s introduction, saying, “Yeah, no shit!”. Considering the reaction that had already happened, the man was someone they were familiar with.  A man like Marr needs no introduction in a room like this. The love and commentary on Marr’s humbleness continued with a woman audibly yelling, “Johnny fucking Marr!”

Marr continuing his chatter with the crowd, came with him, saying, “This is the disco song for Manchester,” as Marr floored the room with a deep cut from his Electronic days with “Getting Away from It,” which was a favorite moment for me. Post-track, Marr quipped, “This is the best I’ve felt all day.” Bantering with the audience at this point, Marr pandered for potential song requests. Marr even joked with someone in the crowd,   “That is a Black  Eyed Peas song, and you know it.” This before jumping into one of the non-contested most loved Smiths’ songs, “There is a Light, and It Never Goes Out.” The song ended in a group sing-along of the final chorus, and the applause was endless. The reception was clear in the crowd, Including and adoringly not limited to the usher nearest me bobbing his head throughout the set. The same usher even, at the end, asked me about Marr’s writing career with The Smiths.

The set ended to fans’ dismay with another smash from The Smiths’ catalog, “How Soon is Now?”. With Marr commenting prior, “We gotta go now, thanks for being so friendly. You guys take care, watch out.” As well as cooly commenting post track, “Cheers you guys,” with a walk-off that included a salute and thumbs up as Marr took a beautiful stroll off the stage as the lights came up. Not many bands would be able to follow up a performance like the one that Marr and his band gave, but The Killers is one of the few. With it being The Killers’ first show back in Boston since their epic Boston Calling headline on the 2018 rendition of the festival, the crowd was buzzing in anticipation for the moment the band took the stage.

Unlike the typical band-selected tracks from other artists, instead, the instrumentals playing appeared to be synth-heavy instrumental versions of moments like “Smile Like You Mean It” and “Mr. Brightside,” to name a few, as the stage changeover progressed. It seemed like an under-the-radar teaser to what was to come. Finally, as the lights went down, the various members of The Killers, in addition to three incredibly talented backup vocalists, took the stage with the last to wander on stage from stage right, of course, having to be frontman Brandon Flowers.

The band started off the set with “My Own Soul’s Warning”, and the first of several confetti blasts accompanied the opening song. Next, the band warmed up the crowd for the hits parade that was to flow that evening. The first triple hit move came quickly after with the trifecta of, “When You Were Young”, “Jenny Was A Friend of Mine,” and “Smile Like  You Mean It.” The hits parade was precisely what the crowd needed. And was the point of Flowers’ first interaction with the crowd going, “It’s been a tough couple of years, how are we holding up? Look around Boston, no one’s in isolation tonight.”

As the set progressed, it was a constant array of shimmer and stunning visuals accompanying a wealth of material from the band’s lengthy catalog. A particularly stunning moment came with the long-loved “Human,” the track that already creates a sea of emotions on its own was even more prominent when accompanied by what appeared to be a video of windows with dancers in each frame in a stunningly choreographed routine. The crowd was in its prime at this moment. Despite the clear energy, Flowers casually quipped at this point, “We’re the Killers. We’re brought to you from the fabulous Las Vegas, Nevada”. Leaning into “Somebody Told Me” at this point, the crowd became electrified as they sang along with the band at total volume. Followed up by a second confetti blast and a yelp by Flowers going, “This one was dead, and it’s alive again.” Diving into “Fire in Bone” before jumping into the band’s latest single, “Boy,” it was beautiful to see the same reaction for both the news as well as the old.

Flowers and the bands’ interaction continued as Flowers paused the set to respond to a fan’s poster in the crowd, going, “What did I promise you in Bethlehem? So you’re not nervous about playing?” This conversation culminated in Flowers inviting the young fan, Rashti, on stage, who smashed the piano on “A Dustland Fairytale,” with Flowers running up to sing with her at one point and encouraging her to take a selfie with him in front of the packed crowd. As the band rounded out the main set with tracks like “Runaways” (“Remember this one?”) and, of course, “All These Things That I’ve Done,” the band swiftly left the stage. But The Killers aren’t the kind of band to skip the encore and quickly made their way back to the stage.

The encore kicked off with “Spaceman” and brought Johnny Marr out for another Smiths’ track, “Stop Me If You Think You’ve Heard This One Before.” Marr remained part of the extended playout of “Mr. Brightside.” A track that anyone would recognize, be it a fan of the band or not. And the way they handled it in a teasing manner was perfection. Starting it out with a yearning slowed down singalong with the crowd and the band slithering throughout, the band enchanted the crowd. Still, as the band quickly kicked it into the high-energy beginning of the original composition, there was no going back. The room went off, and it was the key to what everyone needed that night.

While shows of that size may still be out of your comfort zone, that’s understandable. But I strongly encourage you to check out some new music or see your favorite bands if you aren’t already. It’s been beyond healing and something I can’t recommend more now than ever.