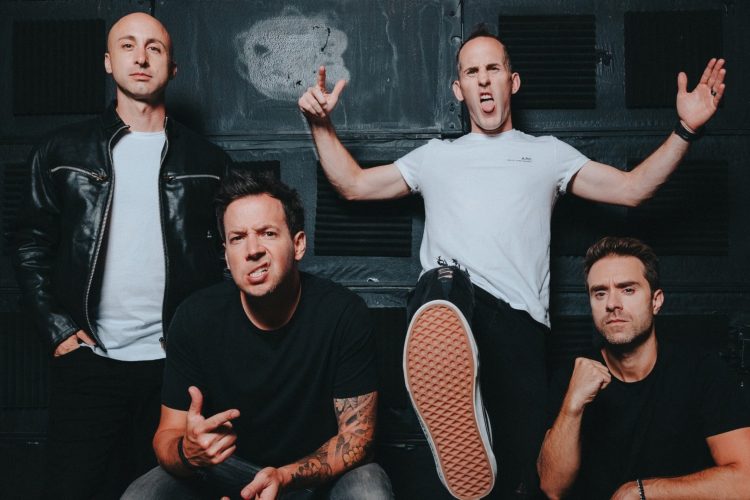 Outdoor shows have been an integral part of my summer since live music made its’ return, be it the first Boston Calling since the pandemic began last May, to New Found Glory in June to the show I found myself at just this past Sunday night. That show was the last night of the Blame Canada tour featuring Canadian punk rock veterans Sum 41 and Simple Plan. A much-anticipated show that ended up bringing over 9,000 people in for a show that originally was supposed to take place in the downstairs of The Palladium in Worcester. Which maxes out at around 2,500. It was a show that was originally booked for May 6th, but as is the new normal, a Covid case pushed the show until the end of the tour. And it was honestly meant to be.

It was meant to be a huge farewell show for the tour, and being moved to the outdoors, allowed a collective night filled with the singing of the hit parades that both bands have produced over their careers. Along for the ride was a band that has over a decade themselves under their belts with Set It Off as well, and the trio of bands was the perfect lineup for one of those last summer shows. Don’t get me wrong, I’m always down for a club show, and looking at what the fall is about to bring, we’re in for a wild ride. But these summer shows chefs kiss.

With the first band to hit the stage not starting until two hours after doors, while previously advertised for 6:30, that didn’t stop loyal Set It Off fans from entirely going off the second the band took the stage. Playing a solidly packed eight or nine-song career-spanning set, frontman Cody Carson still was able to fit in some on-point interaction with the crowd. Carson talked about the band’s Middle East Club (in Cambridge) gigs starting back in 2011 where the band used to headline day shows to a show the band played in a Starbucks to five people. Carson asked if anyone in the crowd had been at any of those shows and it invoked many a hand raised.  This writer included, let’s be honest.  Fans ran to the merch table after, making it clear that the band is only going up from here.  The band went out to meet fans before Sum 41 went on, and the long line made it clear how loyal their fanbase is. And, rightfully so. Considering the past few years, these interactions for a band that always made themselves available to meet fans were sure to be memorable for all parties involved.

Up next, walking out to “TNT” by AC DC, Sum 41 is no stranger to Worcester, and it shows. With their last MA date hitting just a few months before the pandemic, the energy was never-ending through the set. While the band rocked their way through the endless hits, be it the slowed down, always gorgeous moments of “Pieces” and “With Me” to the crowd jumping through “Walking Disaster” and “Over My Head (Better Off Dead),” it was a non-stop wave of fans singing along.

But the sparkling moments didn’t limit themselves to the stage but also within the crowd itself. I found myself between a pre-teen girl who knew deep cuts within the first two notes. And then a  young boy on the other side of me sang every word without hesitation. With the girl,  it was the purity of frontman Deryck Whibley calling for the “41 Salute” which includes giving the middle finger, and the girl quickly realized what it entailed and immediately went, “Welp, I can’t do that”. Also,  when Whibley spoke about how it had been 21 years since their album, All Killer, No Filler debuted,  and commented that there were probably people in the crowd who weren’t even born yet; Her father responded, “That’s you. You weren’t here yet!” The girl glowed throughout their set, saying how it was her favorite band and even Facetime’ing what seemed to be a younger sister who couldn’t attend. Over the years, I’ve learned that some of the most magical moments aren’t necessarily on the stage and more often are found in the visceral reactions in the crowd when seeing their favorite artists.

But the set was a continual long-awaited time from the band. It included every “short angry song” from their last several albums, a shout-out to Whibley’s “father” throwing off the crowd for a moment by saying “My dad grew up around here, his name is Dicky Barrett (of The Mighty Mighty Bosstones fame). This one’s for you!” before diving into “In Too Deep.” The band rocked their way through a seventeen-song set show and still had plenty of time to interact with the loyal fan base that the band has accrued over the last two decades, which is a crazy thing to be writing. As the band left the stage after the final notes of “Fat Lip,” I was left wondering how Simple Plan could follow up even after the energy-packed set of Sum 41, but they very much stood up to the task.

While Sum 41’s performance seemed unable to follow, the Montreal men in Simple Plan came out to a roaring crowd and immediately jumped into the hit “I’d Do Anything”, streaming straight into “Shut Up” flawlessly. Frontman Pierre Bouvier amped the crowd up even more, saying, “I don’t know about you, but I came to party,” followed up seconds later by “Why don’t we pretend we’re back at Vans Warped Tour right now?” and the hits parade continued from there. Alike to Sum 41 celebrating 21 years of their debut record, for Simple Plan, it’s been twenty. And to the crowd’s delight, of course, the band served up hits off that album like “Addicted,” “I’m Just A Kid,” and “The Worst Day Ever.” As well as the aforementioned smash “I’d Do Anything.” While these songs warranted the reactions the band received, the crowd equally went off for more recent tunes like “Summer Paradise,” “Iconic,” and the band’s track with former tour mates in State Champs, “Where I Belong.”

But again, the moments I found most endearing were when the band made some pretty special personalized moments happen. Be it having Set It Off coming out for the final chorus of “I’m Just a Kid” and having drummer Chuck Comeau stagedive, of course, with a mask and a hazmat suit. Or my personal favorite was when Bouvier talked about their song “Jetlag” with a female vocalist part, and it being a song they usually can’t play, but they surprised their videographer, Ariel, by asking her to take on the vocals. Despite her being visibly teary-eyed, she was a natural, and it was clearly a moment that the band hadn’t staged before. The great thing about these veteran bands like Sum 41 and Simple Plan is that their audience ranges from 7 to their 40s if not older, and it’s great to see that still happening. It’s only one part of why both bands have had such lasting careers. The band rounded up the set in the cheesy, I know, “perfect” way with forever loved “Perfect”, which to be honest, was the only way to end it and you could see it on the crowds’ faces and in their voices.

All three bands delivered performances filled with hit parades but also much admired and loved deep cuts. For bands that have consistently performed club punk shows, Sunday night’s show gave more of a  festival energy with food trucks galore, and it’s been an excellent option for fans to enjoy music in an outdoor setting these last two summers at the Palladium; a venue that alone this summer has hosted Hatebreed, Sad Summer Fest, and New Found Glory, and has the upcoming Punk in Drublic festival headlined by NOFX. It’s been clutch as the live music industry continues its journey to fruition again and I hope that it’s a continued tradition.