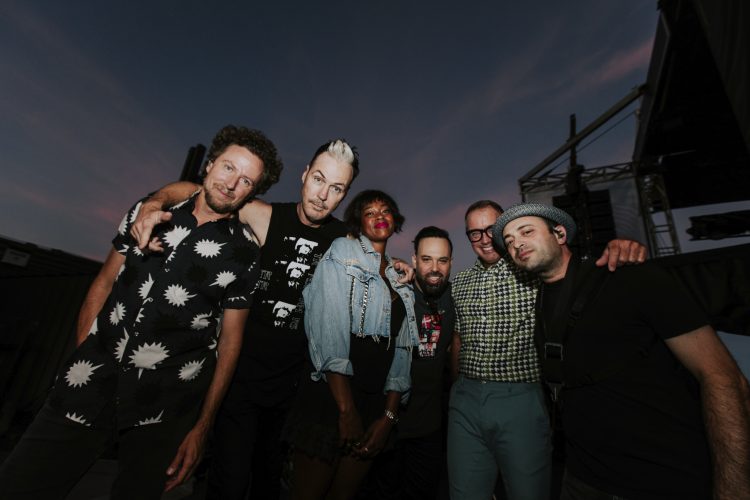 “I’m in a mood so all you summer lovers make ya sway.” As if the weather gods obliged the gods of rhythm and bass, the rain and clouds cleared for a perfect prelude to the start of outdoor concert season at Thompson’s Point.

The evening began with Louisiana soul-rock band Seratones. Turning the stage into a futuristic, funkadelic, purple paradise, they played to their claim that they were “from Venus” with wild vocal trills, groovy basslines, and cosmic melodies in their half-hour set.

A hypnotic countdown started St. Paul & The Broken Bones’ set, putting the audience into a dance trance. Varying between instrumental jams and tracks with vibrant, powerful vocals, the eight members of the band kept it funky and fun and delivered an apocalyptic dance groove. Having released The Alien Coast in January, new album trifecta “Atlas” and “3000 AD Mass” raised spirits with calls to the divine, while “The Last Dance” enticed the crowd to lose themselves in song. “GotItBad” and “Minotaur” showed off lead singer Paul Janeway’s soulful range and big presence, as he owned the stage with a smooth, cool vibe. Sexy bass grooves carried him down and over to the sound tent, where he serenaded his crew before grabbing a stool and parading to the middle of the crowd with the spiritual slow jam of “Sanctify.” From that point on, the band fully captivated the audience, confirming that this is a co-headline tour that’s more than just a dream.

Every member of the band has a raw talent that combined makes a cohesive unit. They know when to highlight the right sections at the right times before coming back in harmony, celebrating the individual, and rejoicing in unity. Picking it back up with the horn section, “FOPP” was an all-out instrumental wonderland. Live only exclusive, the unreleased and mythical “Tarvos” kept the party going with a sax solo to ward off the darkness. Merging synth and soul, “I’m Torn Up,” “Like A Mighty River,” and “Flow With It” provided steady rhythms and wailing vocals to improve the mood and persuade the audience’s hips to move. Ending with the horns and hits section, “Apollo,” “Grass is Greener,” and the 2014 breakthrough single “Call Me” had everyone singing and cheering back with blissful electricity, and the atmosphere grew charged.

Fitz and The Tantrums took the stage in a dreamy haze just after sunset around 8:35, pulsing with electric heartbeat energy, sharing the moment, promising, “We got all night, we can do anything” with dancehall track “OCD.” As the sky grew darker, the crowd rolled up and filled in closer to the action. The slightly scandalous “Complicated” brought the smolder while “Spark” ignited over the speakers.

Lead singers Michael “Fitz” Fitzpatrick and Noelle Scaggs have a sensual charisma and chemistry that is strengthened from working together in a band for 14 years. They know how to have fun with their signature choreographed dances and know how to play off one another’s vocals. Delivering fan and band favorites with “Don’t Gotta Work It Out” and “Out of My League,” they kept the energy dynamic. They have just as much fun making the music as the audience does listening to it.

Giving a lesson in counting and steps, “123456” encouraged making motions and commotion to keep the vibe. Getting carried away with “Sway,” they treated fans to a new single ahead of its release and teased a new album in September. FATT is one of those bands who have consistently solid singles. After months of being cooped up, “Sway” is sure to be a summer smash, encouraging grabbing a stranger by the hand to swing it high and swing it low. Self-proclaimed “100% certified mama’s boy,” Fitz is no “Fool” as the hits just kept coming. Their fun, poppy hooks and catchy choruses keep people coming back for more, as this is their third time in four years returning to Maine.

Heartbreak, despair, and relatability came in with “6 AM” and “I Need Help!” – a song Scaggs wrote when she felt overwhelmed with her circumstances and alone in a room of people. It was met with the front row calling her a queen, to which Fitz wholeheartedly agreed. The heavy drops and blazing horns of “Livin’ for the Weekend” turned it all around, symbolizing that you can get knocked down, but you have to get back up and have some fun with it. “Fools Gold” was the belter that wore down the heartstrings with earnest “ohs” to sing along with. Always ones to be flashy and never ones to be scorned, their breakout 2010 single “Moneygrabber” is a major stand-out in every set. It’s sassy and jaded, and after over a decade of playing it live, it’s incredibly solid and still fun to sing along with. Ending the main set with full crowd participation, cell phone lights came on for “I Just Wanna Shine” and everyone felt kinda crazy for “Hands Up.”

Before coming back on, Fitz took a minute to thank the fans for being real people and real music lovers who share their music, while acknowledging that they wouldn’t be where they are without the fans’ support. The obvious encore of “Handclap” got everyone into the groove and clapping along before an eruption of confetti cannons rained down. The band’s collective favorite and same-named track off All the Feels was laced with love, light, plans, and dreams before the crazy coolness of “The Walker” concluded the night in a suave style.