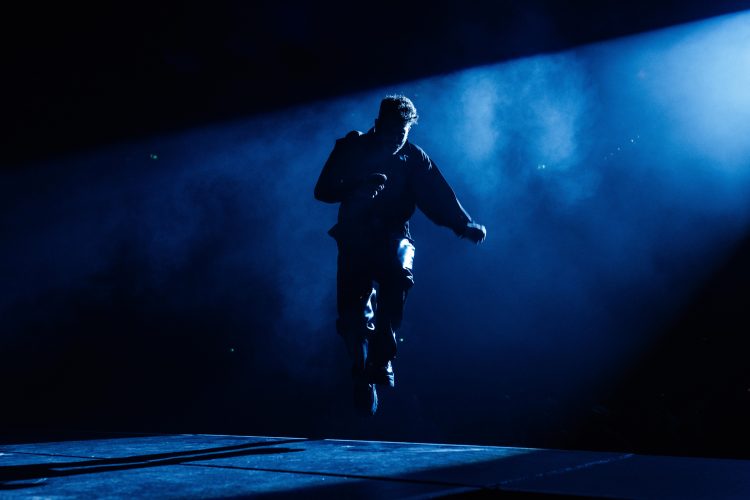 “We’re here to forget for the next hour and a half, whatever person or scary thing in the world or whatever it might be, let’s all just throw it away right now together,” declared Ben Platt only two songs into his set at Agganis Arena last Thursday night as he introduced his song “Leave My Mind.” For the next 90 minutes Platt would take the Boston crowd on a journey giving them the gift of being present in that moment only.

Platt is on the road promoting his sophomore solo album, Reverie, which came out last August. Now four years removed from his starring role as Evan Hansen in the Tony Award winning musical Dear Evan Hansen, the singer is stepping out of the shadow of Evan and into his own spotlight. It’s no small feat to try to establish an identity separate from a role that garnered so much adoration.

Platt did, however, give a nod to musical theatre in general saying “it’s so nice to go to all these places and say ‘musical theatre’ and have people cheer, because it gets such a bad rep in so many places.” He would go on to perform a cover of the Sara Bareilles song “She Used to Be Mine” from the 2015 musical Waitress.

The album Reverie is a 40 minute collection of original songs written by Platt in collaboration with other songwriters. He performed 10 of the 13 songs on the album during the live set. The 80’s hued tune “Chasing You” was a particular highlight coming a little more than halfway through the set. As was the song “Dance With You” during which Platt encouraged the whole audience, while an exceptionally choreographed dance routine featuring Platt himself and his backup dancers, took place on stage.

Dipping back into the bag of cover songs, Platt brought out support act Aly & Aj for a rendition of the Fleetwood Mac classic “Go Your Own Way” which was something that the diverse audience could all enjoy. One more cover, the Lady Gaga tune “You and I” would make it into the setlist before the night’s end.

Before that however, Platt sat down at the keyboard to play a new, unreleased song called “Monsters” which he introduced saying “It has been now over a year since the album came out, and even more since I wrote it is that I’ve continued to live on the earth and walk it, and be a person. So I’ve had more experiences and grown as one does, and I’ve written some more things, so I would like to play a new song if that’s alright.”

After a brief encore break, Platt came back to perform one more song, “Imagine,” the lead single from Reverie which would end up charting in the Adult Top 40 charts. The track was written by Platt during the quarantine portion of the COVID-19 pandemic and was inspired by “the way that our loved ones, the people that make life worth living, can turn the mundanity of suburbia into something magical and fantastical. Everyone has that person or people that make their world technicolor, fueling us with a love that can feel supernatural,” according to Platt himself.

An already well honed stage presence makes Ben Platt a natural on a concert stage, but there are notably some stark contrasts between performing musical theatre and putting on a pop concert. Throughout the night, Platt would create an intimacy by taking time to tell the crowd about his songwriting process, relationship, and more. As he sets down the path to establishing himself as a solo pop artist, separating from his Broadway and film acting credits, it’s clear that Ben Platt is ready for his next role- a pop music star.